Some time ago in the 1960’s when there were no wildlife restrictions, a Greek man brought a load of squirrel monkeys to an island he owned. Without predators on the island, the monkeys thrived and La Isla de los Micos (Monkey Island) was born. Today, tourists can visit the island for tours and feed the quasi-domesticated monkey. I failed to take a picture of the sign, was too excited. Photo source: www.visitleticia.com

I tagged along with the two Aussies’ one day tour to the Monkey Island, approximately 40 minutes boat ride away from Leticia. The island was empty when we got there, we were the only tourist. A staff led us through towards the jungle about 100 yards away from the huts while he whistled. We saw, as we arrived at the edge of the jungle, tens of monkeys swinging down from the tree tops. Then the staff handed us each a banana to hold. Half of mine was torn by the first monkey that jumped for it.

There was one rule — don’t touch the monkeys. They will climb on you and in every which way but you’re not allowed to pet or stroke them. It was a feeding frenzy, monkeys treated us as tree branches and attacked the hand with the banana. Their little feet were very flexible and they weigh close to an eggplant. I had three on one arm and it did not feel heavy at all. At one point there were so many monkeys all over my face I wouldn’t tell heads from butts. But they smelled okay, like poodles almost.

Banana gone, monkeys still waiting….one was digging between my fingers. The one on top of my head was giving me a massage the whole time!

And as any normal living been, one had a nature call which landed promptly on my foot. “Es buena suerte!” The staff said. Of course. So far everything that has to do with unexpected poop landings has been good luck, no matter what country or continent I’m on, these good lucks are universal.

Checking on my ‘”lucky foot.”

It was a brief and glamorous 15 minutes. We all wished to spend more time with a few of the monkeys that lingered (on our heads) but the staff was making his way back to the gazebos. What a way to engage the wildlife with minimal intrusion! There would have been no other ways to get this close to any monkeys in the Amazon, squirrel or not. 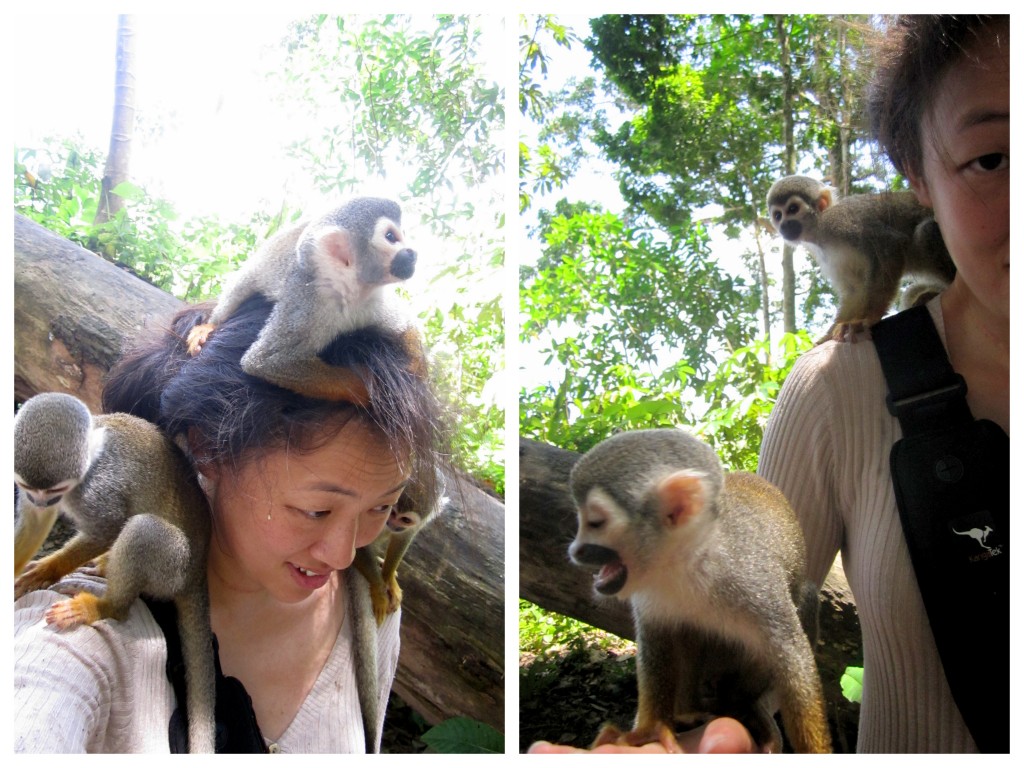 On our way back we stopped by someone’s house to see the giant lotuses found only in the Amazon and under specific water conditions.

Hard to tell without something to compare them to, but each was about 3 feet wide or larger!