Frank S. Todd is the leading world expert on all things penguin, and other birds. I had a question I’ve been wanting to ask during his lectures but since he’s such a penguin lover, I thought I would wait for a better place a time.

After dinner at the Polar Bear lounge/bar where Frank stationed himself at his usual spot and downed three whiskeys later, I thought the right time has come.

“So Frank,” I asked, “what does penguin tastes like?”

He looked at me dead in the eye with an expression as stern as the rocks the penguins make their nests on. I thought, maybe I should’ve waited for a few more whiskeys.

“When the helicopter landed it took a few out so we couldn’t let them go to waste. Penguins taste like seal, or whale.”

Really, is this guy joking? How in the world would I know the flavor reference to whale or seal.  And why were you eating those anyway, the boat ran them over? As usual my face gave away how confused I was.

“They were fishy and don’t taste good.” He concluded.

Got it, mystery solved. 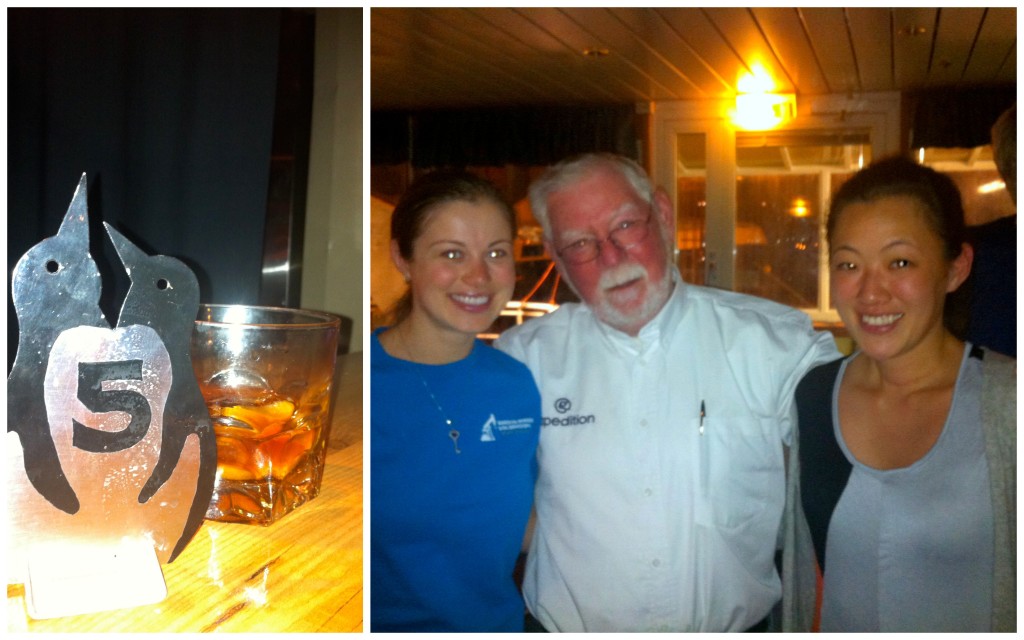 Frank, Nicole and I at the Polar Bear lounge. It’s not the best smelling room on the sip but it’s where the party’s at!

I don’t think anyone can not like a penguin, even the mean, pebble stealing ones. From our Antarctic trip we were able to observe three species of penguins. Some facts about penguins: 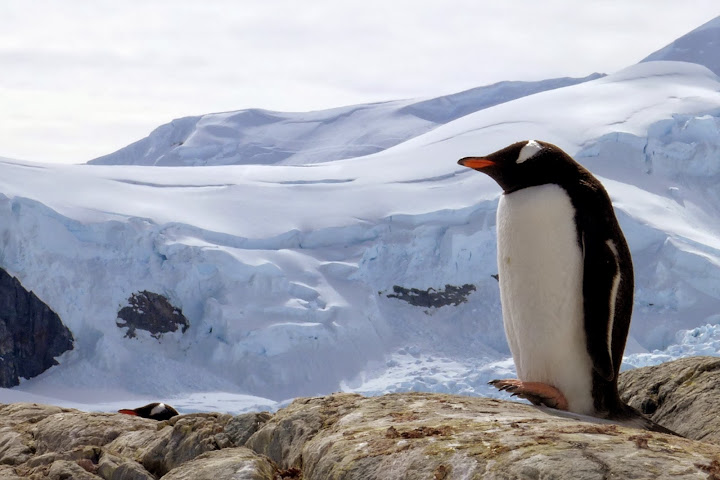 Zen penguin….from the posture, looks like this one is standing (sitting?) for the long haul. 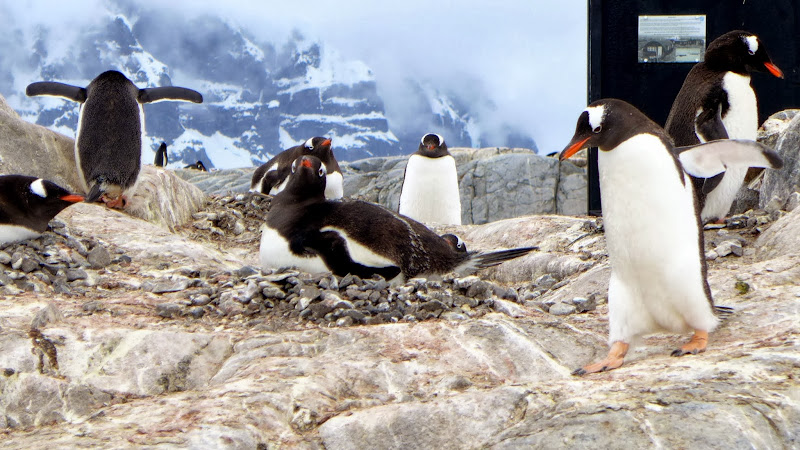 Not photoshopped…just another day at the penguin rookery! 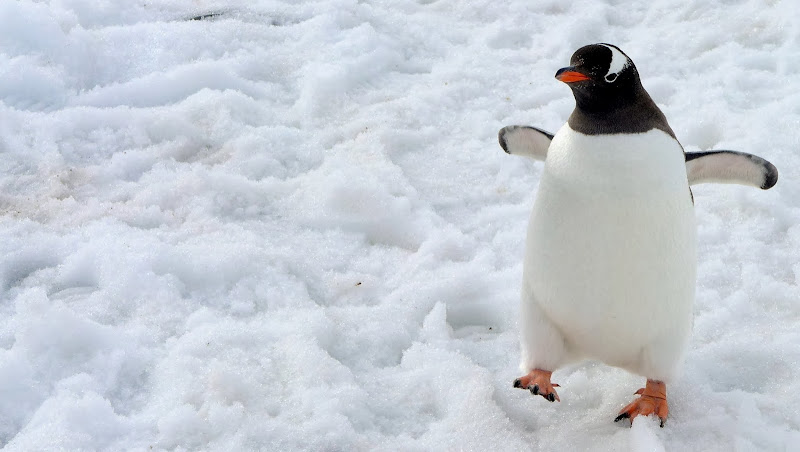 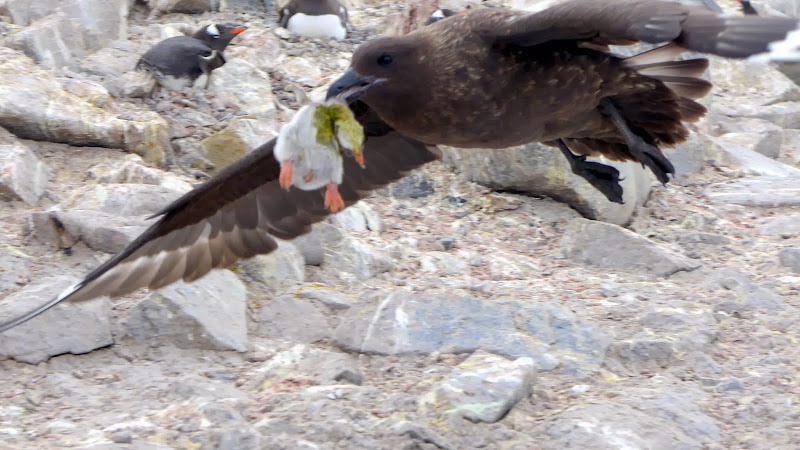 Oh no the skua took one… 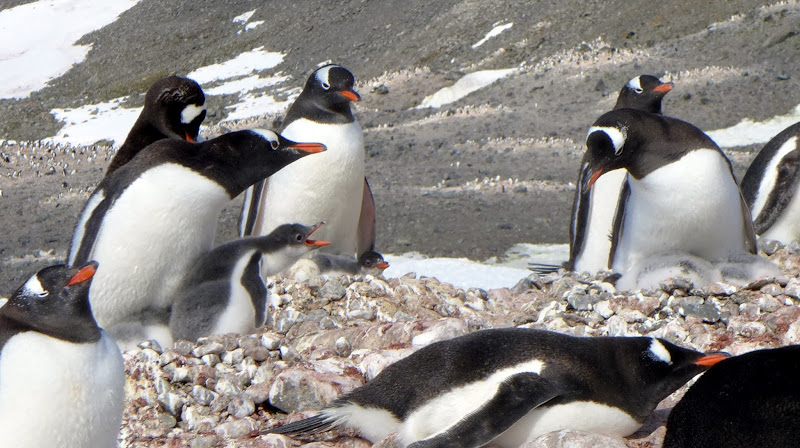 Mind your own rocks! Baby penguins can get pretty feisty. 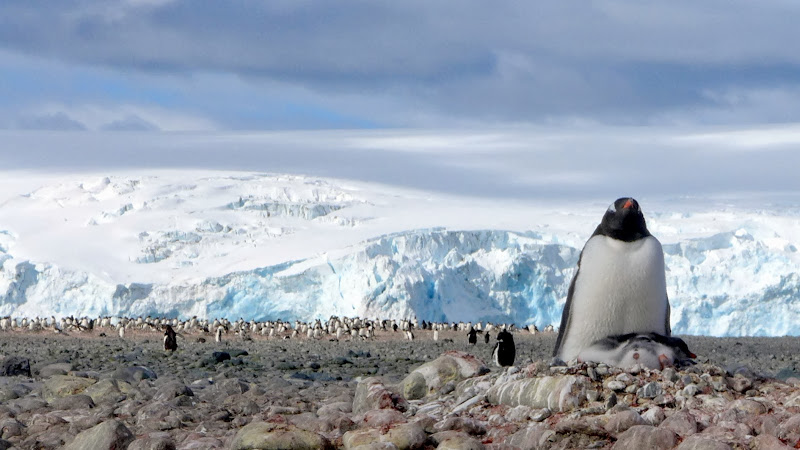 Top of the world penguin

And here are my favorite penguins, they are the most curious of all… 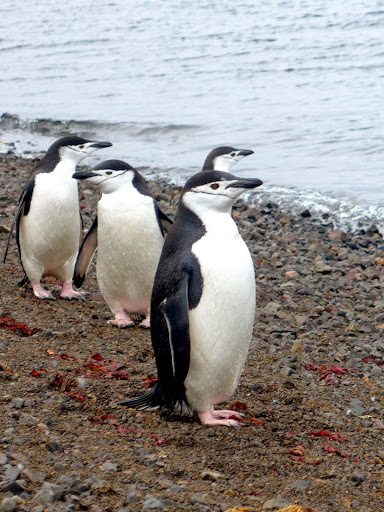 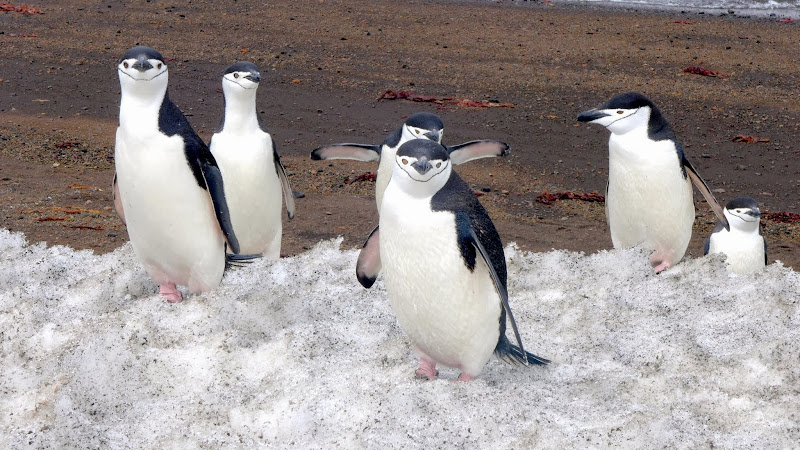 They were the most curious of the penguins. Almost enticed them to jump on me…almost….

These penguins like to stay in colder temperature and is not as often seen in the peninsula. They don’t have the orange accent like the Gentoo and no strap like the Chinstrap. We managed to see a few stranglers hanging out and a chick as well. 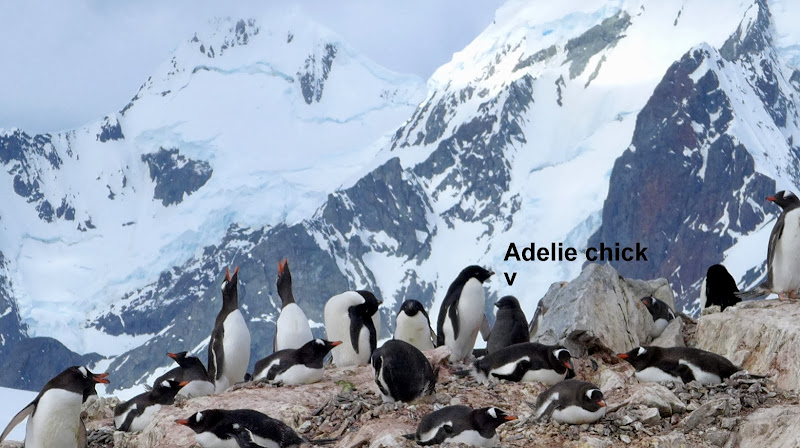 Adelie chicks are all dark while the Gentoo chicks are multi-colored. 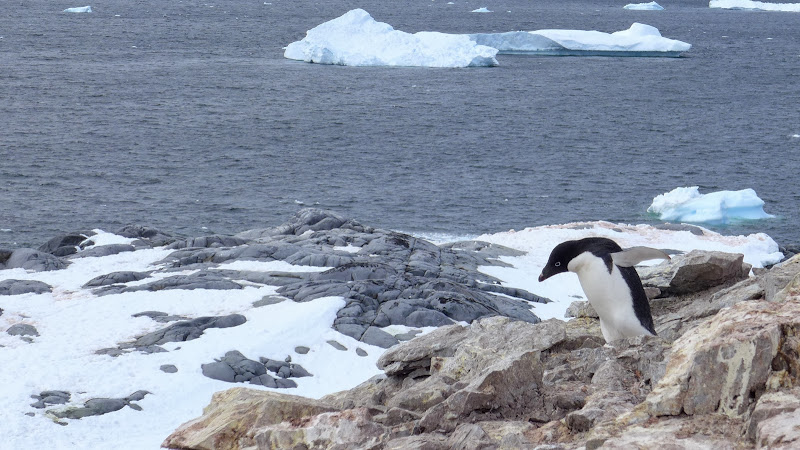 A hardworking Adelie going for the ocean to fill up on more krill for the giant baby.

Repetitive routes the penguins take between their nest and the water create these trails that we referred to as “penguin highways.” There’s usually one for coming and one for going. 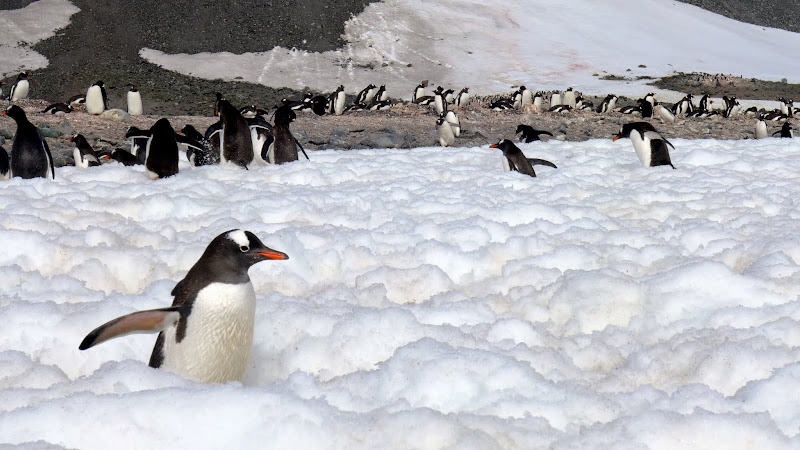 There were at least 20+ lanes here!

Sometimes it’s so deep it’s more like a trench. 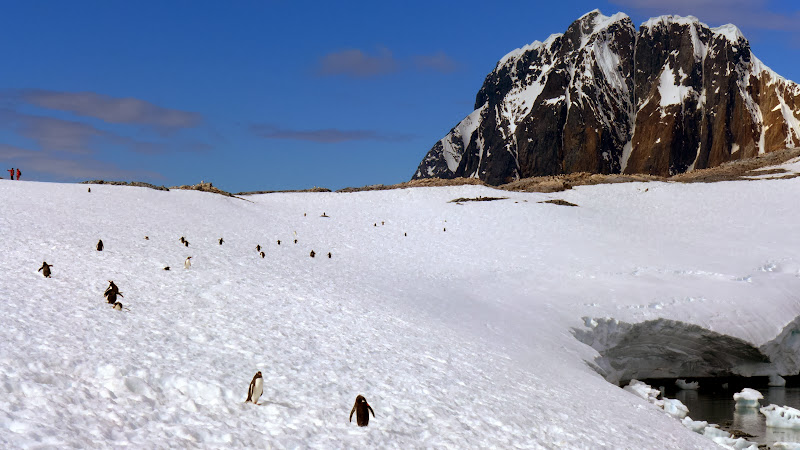 Both the coming and going. 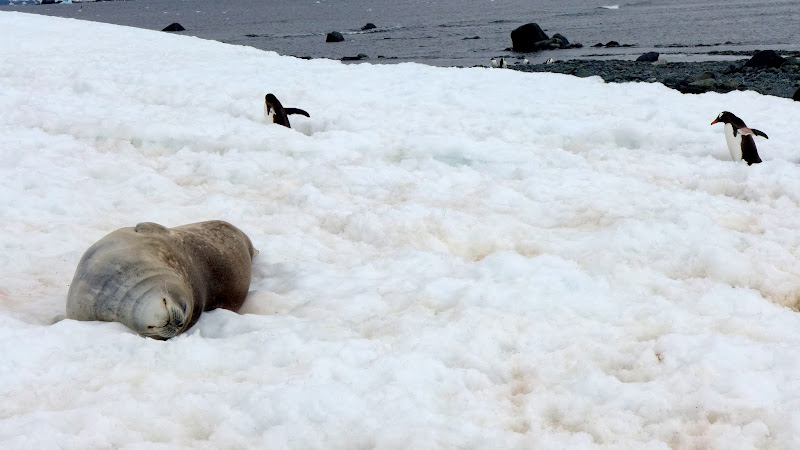 At least the seal didn’t block the passage….! 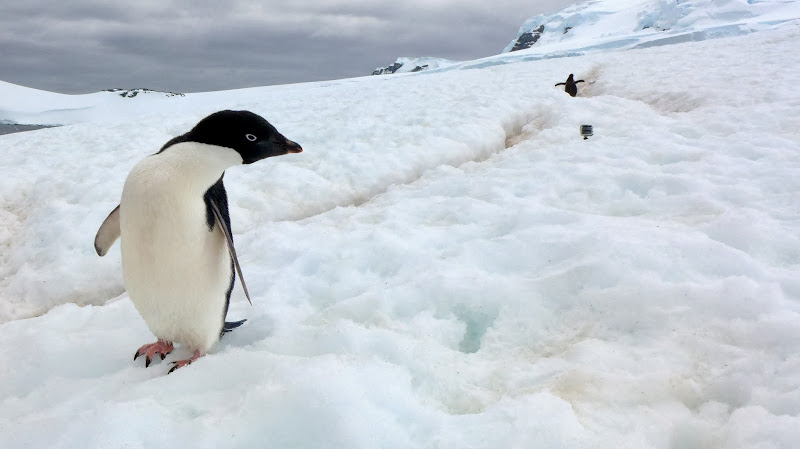 What’s that on the road? (Pst smile! It’s a GoPro)