Antarctica – The Feeling of Nonexistence

After I returned, many friends and family ask about Antarctica and what it feels like to be there. For a while, it was hard to find proper words to describe the experience. Did I feel small? Yes. Was I blown away by its pristine beauty? Definitely. Nothing seems to get it right. And finally, it dawned on me. The feeling that resonated with me most while we were out in the midst of blues and whites, was the feeling of…nonexistence. On several occasions, for a brief moment, I evaporated. It’s what I imagine birth, death or space travel would feel like. 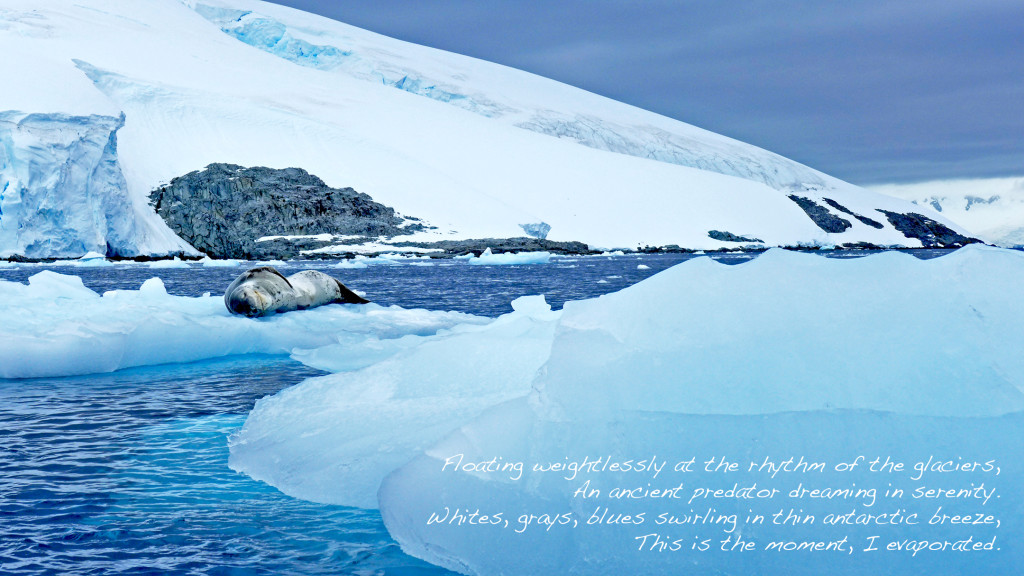 Doesn’t get any more surreal than this day.

And as strange as it may be (since I didn’t feel the same way about wildlife from other places, and I’ll still try llama steak though they are oh-so-adorable), after Antarctica, whenever I see pictures or hear any related news, my attention beelines to the source. My heart aches when I read an article about the Japanese whale and dolphin hunts in the name of “tradition,” or how the Chinese harvest omega-3 from whale sharks. God forbid if anything bad should happen to the penguins! 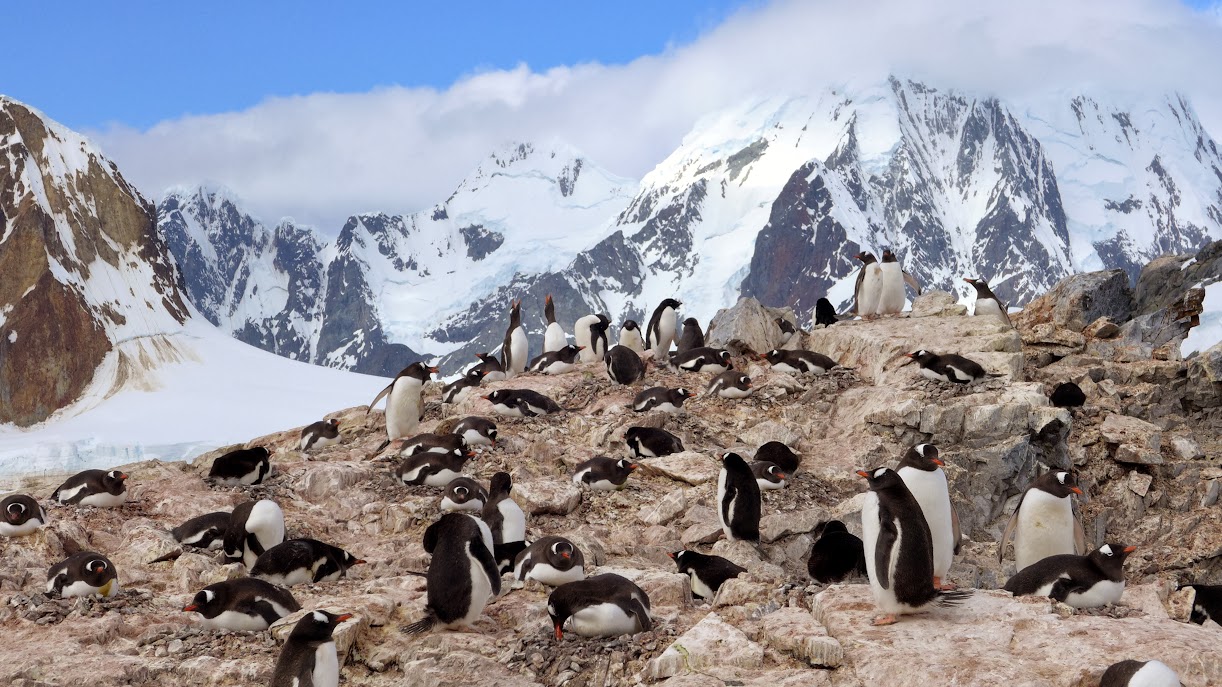 I still don’t feel like all this adequately describe Antarctica 100 percent because it touches merely a few realizations of many. I can only say…put it on your to go list!

As I traveled south towards Ushuaia, the most southern city in the world, I met many travelers heading north who just came back from Antarctica. They showed me pictures with dreamy expressions as if they’re savoring every bit of that memory while it’s fresh. Each had their interpretation of the experience, and every single person said it’s a worthwhile trip.

December is the start of summer in the South Pole. Book anytime between mid-December to late-February will give you the best chance with the weather. You will likely begin your trip from Ushuaia, Argentina, or Punta Arena, Chile.

There are many ways to get to Antarctica. As a tourist, you either book ahead online, in-person or over the phone with an agency. You can also wait on standby and book last-minute deals. Other travelers said one have to be in Ushuaia to do this, but the agent I found in Ushuaia told me she will take e-booking, PM me if you’re interested!

At first, I had no plans of going. I wanted to but also thought it’s quite expensive. For two days I did practically nothing in Ushuaia then the day before New Years, I figured I should, at least, do some research at an agency. Based on word of mouth, I went to the Freestyle Travel Agency to see what’s available.

I waited a whole morning and afternoon at the Freestyle Travel office, debating with myself and texting with the boyfriend for feedback on whether I should go or not. This trip will significantly cut into my reserve, but yet, I wondered how much regrets I would have for not going when I’m already at the End of the World!

Thanks to Sara’s persistence and help, she secured me the last spot on the MS Expedition ship. Six hours and $4k later, I was booked to go to Antarctica in less than two days. Did I really just do that?

While I was filling out the paperwork, another group came in looking for the same spot I just booked. You know what they say about supply and demand, that erased any uncertainties I had about signing up for this place!

What to expect in the next 10 days

It’s advertised as an 11-12 days trip, but that includes the day when one arrives in Ushuaia and the last half day at port. Essentially the travel time to Antarctica totals about five days round trip, and the time for “landing” is 4 days (with 2 excursions per day). 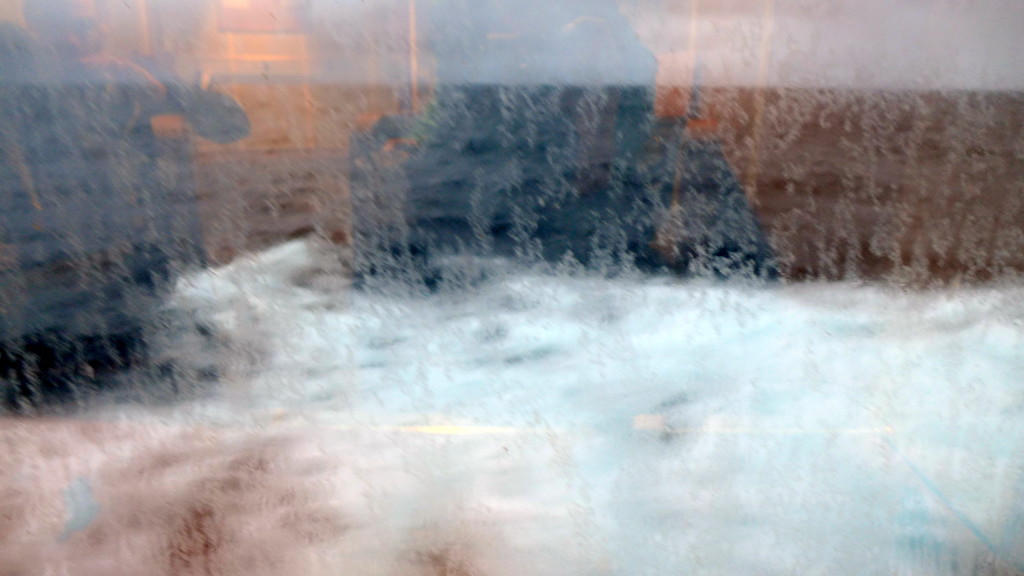 The waves were bouncing off the ship during the Drake Passage. Remember, this is considered “calm”!

Notorious for being the roughest sea on the planet, our ship was lucky with what the crew considers as a “calm” ride (though the waves can still toss you around once in a while). Most passengers were on Dramamine to help cope with the seasickness. I refused to take it because I don’t ever get seasick even with some rough waves. Twelve hours in and I started to feel bad about my decision to be on this trip. Then I remembered that ginger is supposed to help combat the symptoms and asked the kitchen for some freshly sliced ginger. I added hot water, sugar and occasionally tossed in a tea bag with it. I refilled the ginger brew every other hour, and it worked its magic. I didn’t feel wonderful, but I was able to walk around and attend the lectures. Take that Drake Passage! 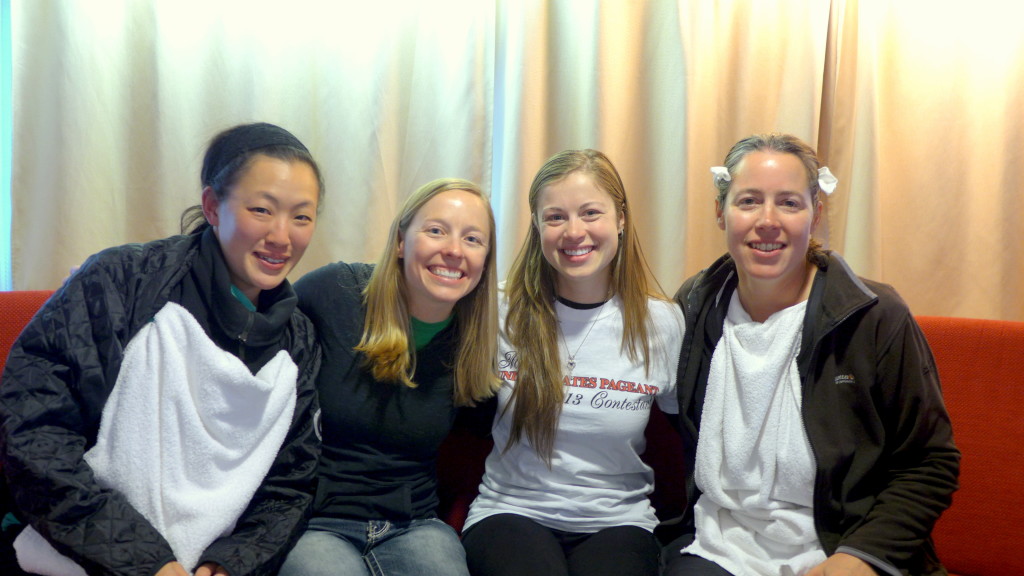 The girls, three from the US and one Swiss (right). This was after the black and white penguin contest, in case the towels and hair pieces didn’t speak for itself.

I was in a four persons female dorm. There’s always a bit of anxiety before meeting the others because you never know what fate has in store for you, but luckily, all the girls were super chill, and we got along very well. To have four in a 15 m2 room can be a bit tight but space was designed to utilize every nook and cranny. Everyone was very considerate and gave plenty of space for one another. 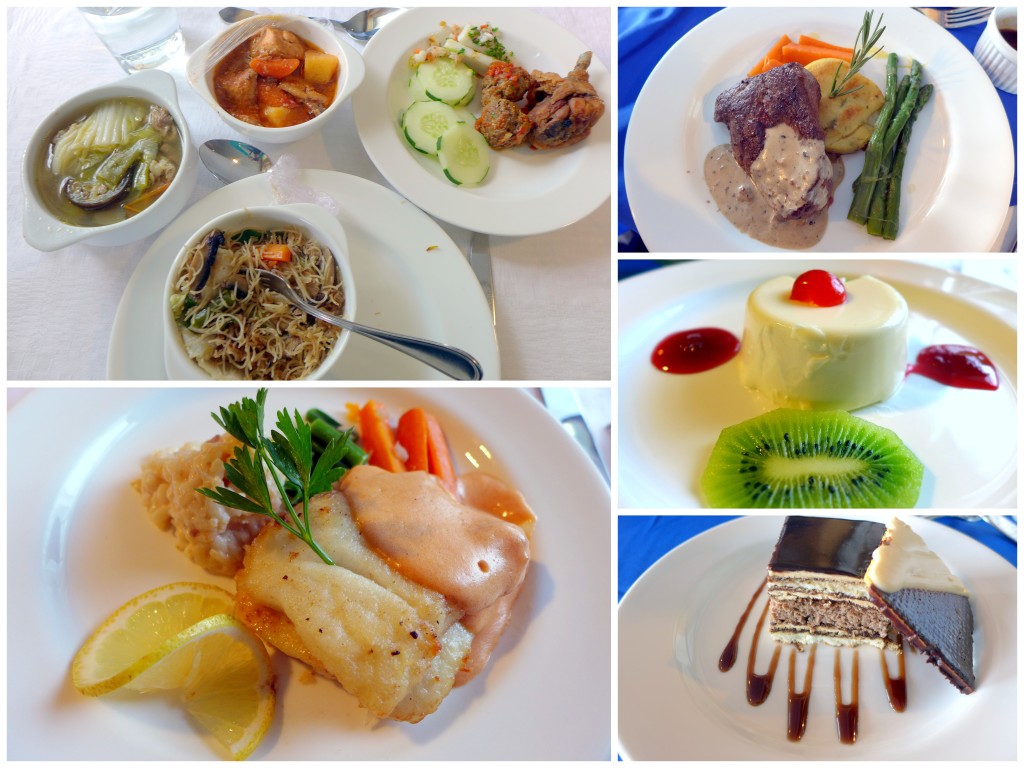 Food on the ship had a different theme each day and was very delicious.

Was EXCELLENT. For months I was deprived of authentic Asian cuisine so on day one, I asked the crew chef if he has any Asian soups in the back. He gave me some Filipino (very similar to Chinese) short ribs stew and from then on he saved some for me every day. Also some adobo chicken and rice vermicelli too. It was awesome.

Each day there will be two excursions by zodiac raft, included in all passengers’ itinerary. You have the option to kayak instead, and also camp on land for one night. There is limited availability for kayak and it’s an additional $900. The camping is an additional $150 roughly. The kayak option is pretty cool in that it’ll put you eye to eye with the water (while wearing a dry suit just in case). The camping is a must if you can snatch a spot. 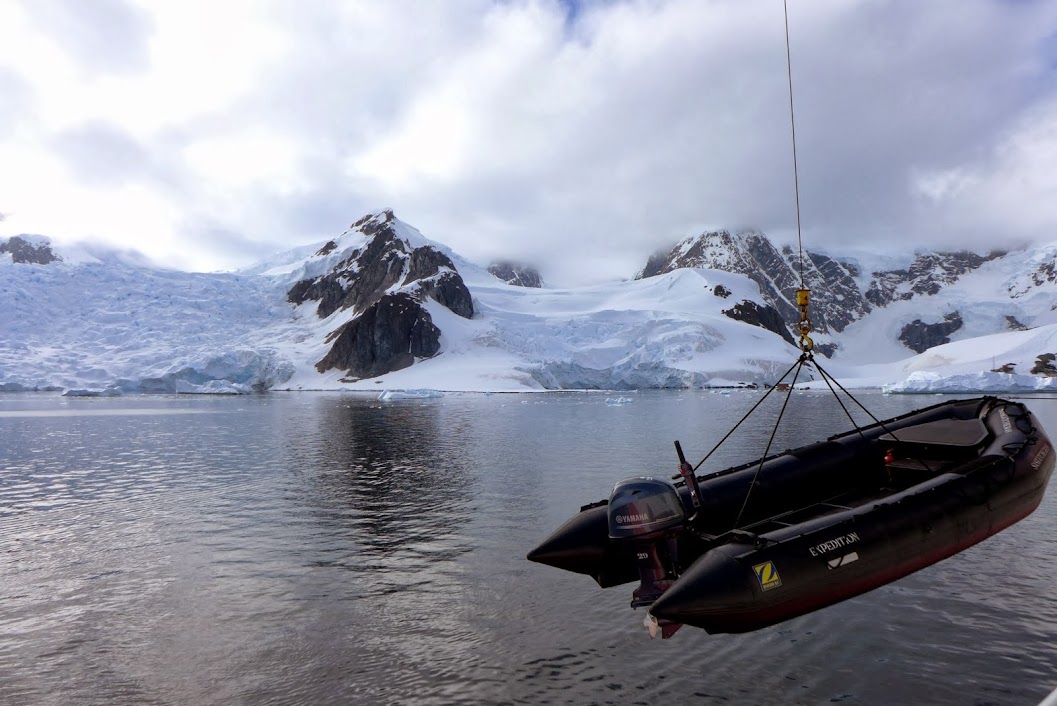 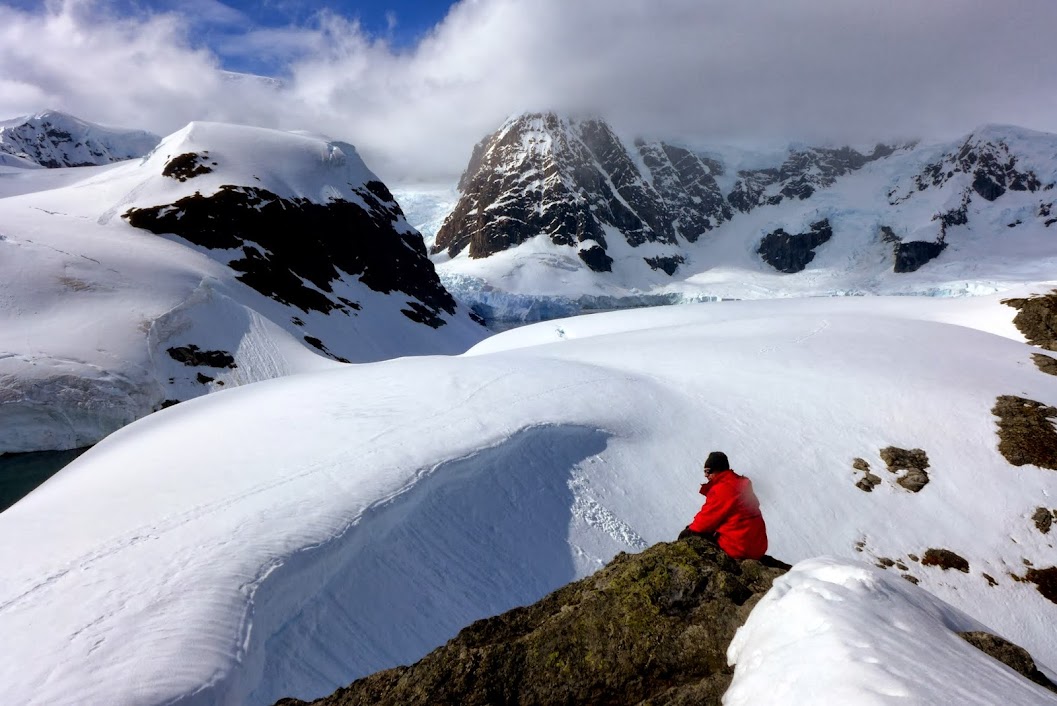 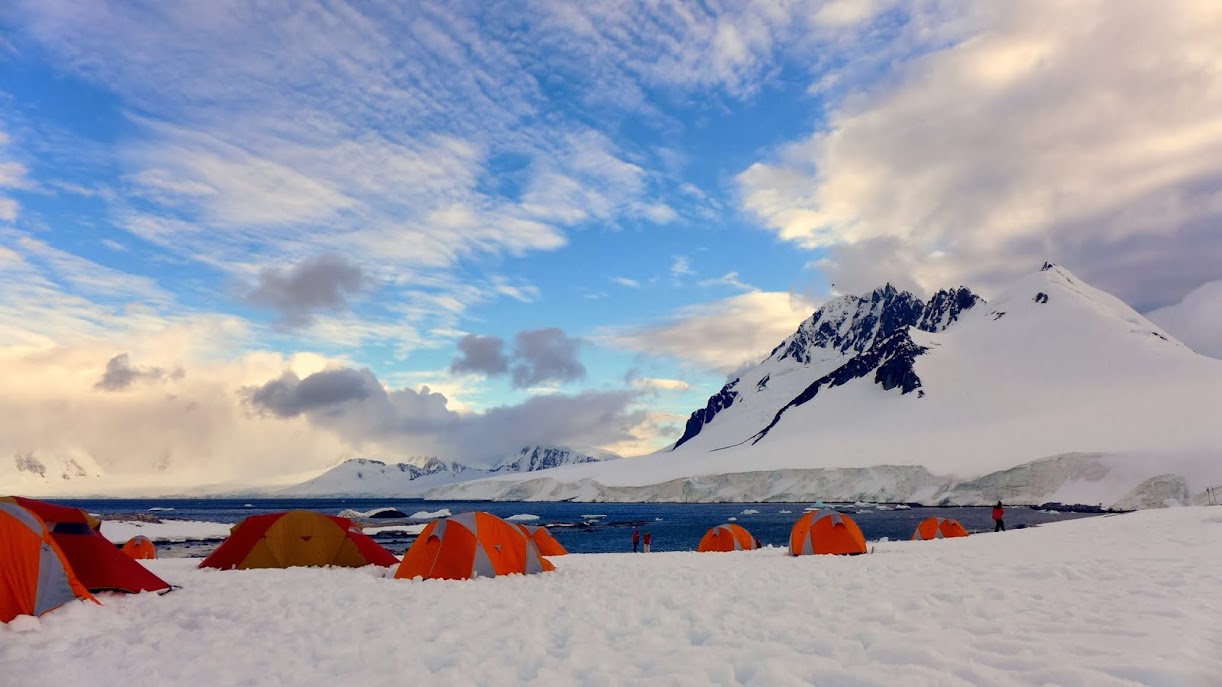 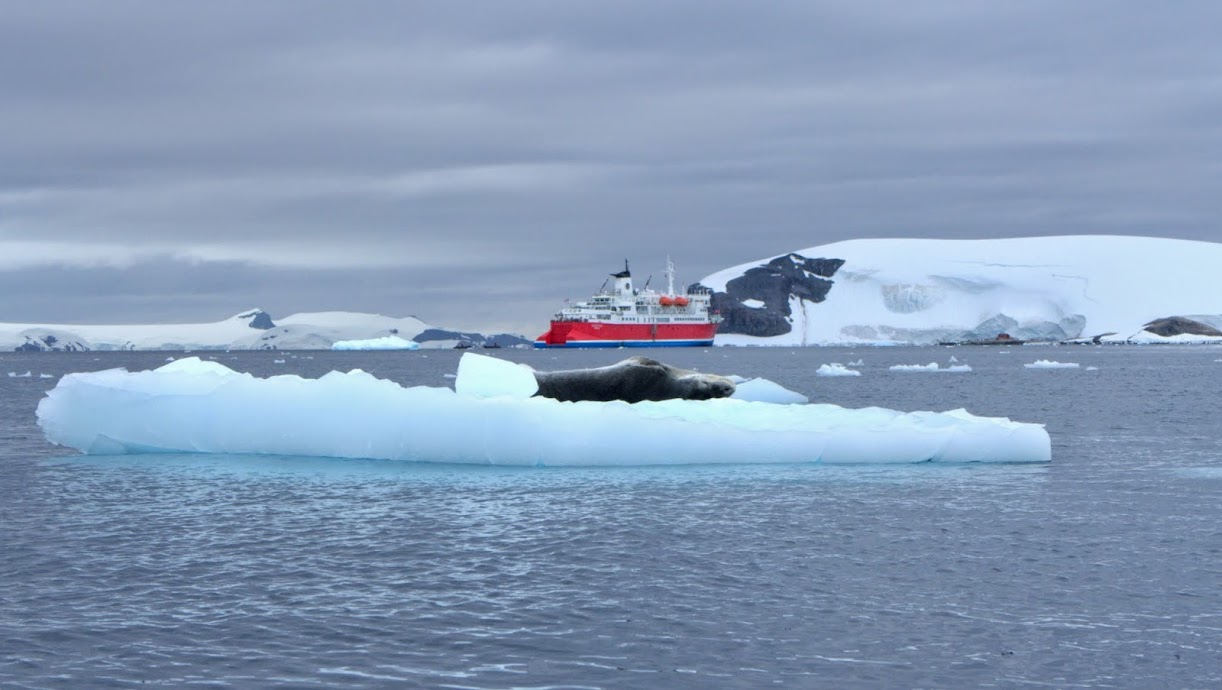 During the 5 days of the Drake, there was no down time. Lectures, music and movies lined up from morning to night. All the guides on board are multifaceted and extremely passionate about the continent (which I can see why now. Whenever possible, I would take the opportunity to return to Antarctica too!) Don’t know about the other ships, but I was darn glad I got on this one.

Antarctica, the place everyone worked so hard to get to and wishes to protect it for eons to come.