Why Travel Long-Term? Or Solo?

How it all began

After college (almost a decade ago *gasp*), thanks to the support of my parents and also some of my own savings, I was fortunate to have the chance to travel to Asia for four months (though mainly China). That was the first long-term trip I’ve ever taken. Prior to that, my travels were no more than two-three weeks at a time and always with a deadline.

I had no return ticket. My aunt in China very graciously asked other relatives about their seasonal apartment that was vacant, for which I resided in for nearly 3 months and used Shanghai as a hub for all my trips in China.

First time is always the toughest

I paid my dues, mentally and monetarily, in learning how to travel long-term and how to backpack appropriately. First, I was still learning how to be alone and not look for distractions all the time. On several occasions I cried and thought maybe I should go home, then I remembered why I wanted to be there in the first place–to see the world! *wipe tears away* and so I continued.

Second, travel blogs and travel information in general were scarce and not readily available back in 2006. There was no Wikitravel, no iPhone, no apps, no google map (on phone), limited TripAdvisor reviews and Lonely Planet books, and rarely any online hostel bookings (holy crap did I just write all that? I sound ancient…)

To figure out the information I needed, I referred to a Chinese Nat Geo Guide book on China, relatives’ input, travel agencies, and advice from new friends and other travelers. I googled too but the information was all over the place (or barely anywhere). There was a lot of note taking, map scribbling and paper shuffling.

I arrived with a rolling luggage and had to figure out the equipment and supplies needed to backpack. I started with a 70L backpack, thinking larger is better. I stuffed it to the brim and brought all kinds of things with my “just in case”…ended up regretting that decision every step of the way. I got the backpack from a Shanghai underground market for a “deal” of around $80 USD. For which the bottom zipper broke after a week and I had to secure the backpack with a belt for the following week. And of course the vendor would not take any responsibility for the lack of quality even after I returned to the store for exchange/repair.

The road was a lonely place even though my trips were short, about 2 weeks at a time as I used Shanghai as the hub for transfers. I stayed in Shanghai for a week or two in between trips to try to research on what I wanted to do next or who I can go with. It did feel like home though and my aunt always invited me to join their daily family dinner. But after about 3.5-4 months, I knew I did not want to get a job there and was very homesick that a return date was set and I gladly boarded the plane back to the States. 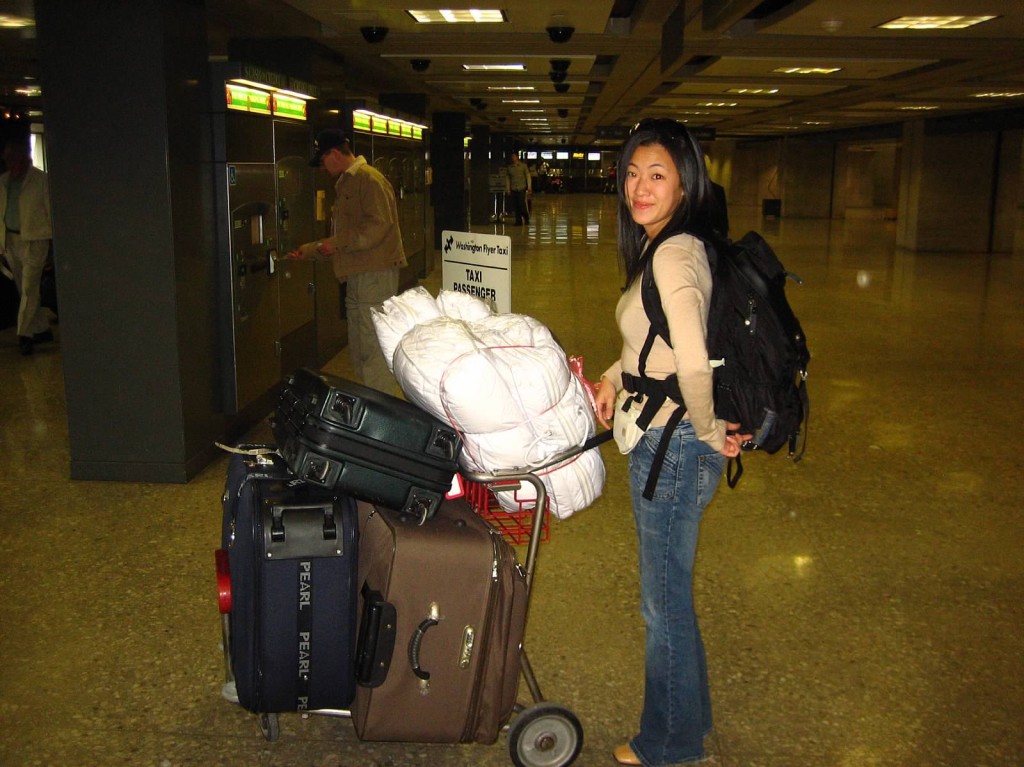 Return from the first long-term travel trip. Was also tasked to be the deliverer of all Asian goods for the family.

Once returned, I found a job and continued on with life as it was meant to be. The 9-5 and 15 vacation days a year.

For the next few years I worked and tried to build on my career. It was comforting and necessary to have a stable job, steady relationships with family and friends, establish routines, and save on income. In addition to the usual ups and downs, life was good.

Then at some point, life events raised new questions and sparked ideas about change. The questions were not what do I want out of work, or living situation, or vacation spot, or lifestyle or what don’t I want, which I often used as a tactic to figure out the do’s. It was nothing specific. It was simply, what do I want out of life? (Inception!)

The little voice in my head grew louder and snowballed into reality. Will spare the details and jump right into —

The difference between a vacation and long-term travel

Biggest difference of all, is the mentality. A vacation can last 1-4 weeks, depending on how lucky you are with the workplace. I was always thankful of my workplace when I was able to take the longer trips. But there was still a timeline and a deadline. Usually the return ticket would be booked prior to departure with an ambitious plan to cover as many cities/countries and as much ground as possible. That’s happened to me 90% of the time and it’s inevitable. Sometimes itineraries were planned down to the days. Where to stay, what’s there to do, what time I must arrive where. Sometimes there were no itineraries but as the clock ticked, the thoughts were always ticking as well — what’s next? What tour or place or restaurant? How many days left? Will we make it to the airport on time?

It’s very easy to get carried away with the race against time instead of enjoying the moment.

The things I loved about long-term travel that I learned from my first attempt was not feeling rushed and not have to worry about anything else. The ease in which I could learn something new from other travelers and be able to change my route. Or I can decide to stay longer in one place because it’s wonderful. Rest when I’m tired and go when I’m recharged. This entire “process” provides a lot of opportunities for self-reflection. Do I want to do this? Why? Why not? Should I sacrifice one thing for another? Will I regret it? Is there something else I rather be doing? Maybe I don’t know. But at least time is on my side.

There are so many different groups of travelers. Couple, family, friends, siblings…and then, the solo. There are benefits to each group formation but here’s something solo travelers have that no others do — total freedom. Want to eat something particular? There’s no “hey what do you think of xyz for dinner?” Or if you suddenly decide the day before a bus departure that you really want to stay for two more days, then you stay for two more days.

Personally, I like a mix. Some solo and some group. The group travel is quite familiar to most, but the take on solo travel is not as often encouraged. The most common question people (friends and strangers) would ask me is “Don’t you get lonely?” And the matter of fact is yes, of course. There are times I get lonely and homesick, I miss the boyfriend or I crave something I can’t find in a strange land. But the same feeling occurs at home too. It’s natural to feel lonely or bored when there are no external stimulants. Try and take the TV, phone and  internet out of your life and see what happens.

Traveling solo also encourages one to make new connections, meet new people, talk and learn about someone else’s background and history. It welcomes other people to learn more about you. A group automatically creates a force field of comfort, however, the force field also keeps others at a distance. There are certainly exceptions. I met plenty of couples/groups who were curious and interested to get to know other people, though generally, people evaluate their distance and approach base on the formation of the different groups. 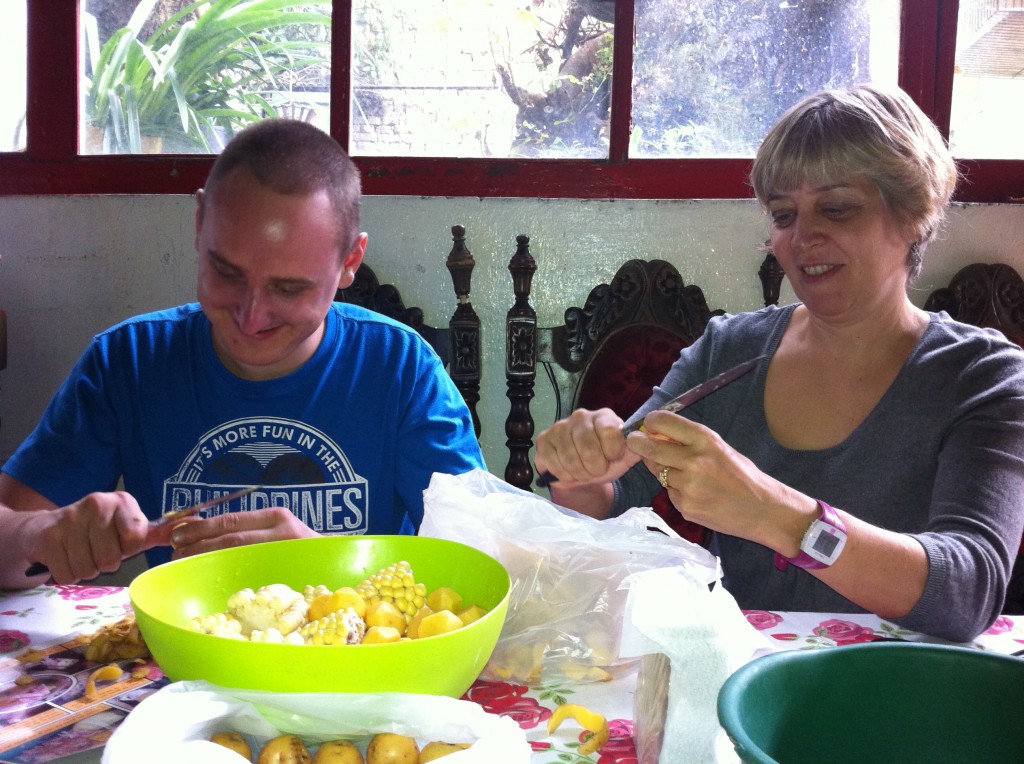 Such kind and funny people I met on a bike tour in Bogota, Colombia, and later we all took the same cooking lesson the next day.

All in all, the best part about solo traveling is the time you have with yourself. Everyone’s been alone, but usually not for long and usually not without some sort of external communication. During the crazy 8, 10, 15 hour bus rides and nights in the tent or a hammock, I didn’t need to socialize with anyone else and I was not distracted by the massive world of information. No wifi, no emails, no Facebook, no electricity. It was very tough at first. My goal would be to “get through” the ride, the isolation, the lack of activities.

Solo travel is the best time to reflect about oneself. Embrace the silence and listen within.

Then I learned to embrace the isolations. Observe the passing sceneries, listen to the monologues in my head and let it run its course. Process thoughts and feelings that I had set aside and never revisited. I would arrive at the destination with a bit more peace of mind than when I departed. Of course this can be done anywhere and does not necessarily require one to be 6,000 miles away from home, though at home there would be too many comfort force fields to withdraw back into. As a solo traveler, you’re as naked as a snail without shell. Try it, even if it’s only for a week. If it’s not for you, move on. But don’t miss out on the chance to be amazed!