At the very southern tip of Taiwan is Kenting National Park. Established on January 1, 1984, it is Taiwan’s oldest and southernmost national park, known for its tropical climate with warm to hot weather year-round.

Although Kenting National Park is located in Kenting, these two places should not be confused as the same destination. Kenting is the wider area that includes small townships as well as the national park. The main town is called Henchun (恆春古城) which is a bit North of Kenting. Many hotels and hostels are located in this town. The Kenting National Forest Recreation Area can be reached by bike or scooter from Hengchun and is one of the top 10 tropical botanical gardens in the world.

Amongst the many activities visitors can do in Kenting, one of the most popular (and rewarding) is diving. After decades of protection, the reef surrounding Kenting National Park is vibrant and full of life. As a local hot-spot for summer vacations yet little known by the international community, Kenting has well-developed tourist amenities with an abundance of professional dive centers at very affordable rates. With a bit of research, I read raving reviews on TripAdvisor and decided to go with TDC (Taiwan Dive Center) for my open water certification because they are also a B&B.

How to get to Henchun

TDC offers pick-up from the Henchun bus station, which is only a short 30 minutes ride from Zuoying HSR station. The total travel time from Taipei to Zuoying (Kaohsiung) via HSR is approximately 90 mins. After arrival in Zuoying, exit the station and head outside where there is a bus stop. Line 88 bus to Henchun/Kenting operates 24 hours.

Once I arrived Henchun bus station, I gave TDC a buzz. Someone came to pick me up in the oldest most dilapidated little red coupe I had ever seen. All I can think of at the moment was, I hope this doesn’t reflect the condition of their diving equipment, I don’t want to be fish food!

A girl with short wavy hair and bewildered eyes shouts from the window, “Are you Theresa?” I nodded quickly. It wasn’t a very busy city, probably because it’s a weekday. “Do you want some bubble tea?” she asks. Sure, why not. I don’t know your name or the condition of where I’m sleeping tonight, but it’s important to stay hydrated.

She parks the car, and we walked to a tea shop right across the street, where she promptly ordered 8-10 cups to go. We hopped back into the car, she said it’s only a ten-minute ride to TDC, and that don’t worry, this car will make it [sunsine smile].

It’s always good to be part of a party that returns with gifts. We were greeted by her (thirsty, or hungry) colleagues as they pick through bags of bubble tea. I was introduced to the dorm with six beds, and I was the only patron (yay!) and shown the bathroom facility in the next building attached to the house. Because most visitors are there for snorkeling or short dives, the bathrooms are set up more like how it is at a gym, with a full bath in each stall. There are about eight stalls inside the warehouse-like building.

Everyone was in siesta mode, and check-in was a breeze. We quickly discussed the open water certification process and options, and then I was introduced to my coach. I later learned that he began as an underwater welder before joining the dive center. Around 5 pm when all the visitors has departed, except for me and this other Swiss guy who will complete his certification the next day, the coaches asked if we wanted to join their trash pick-up session. And so off we went! 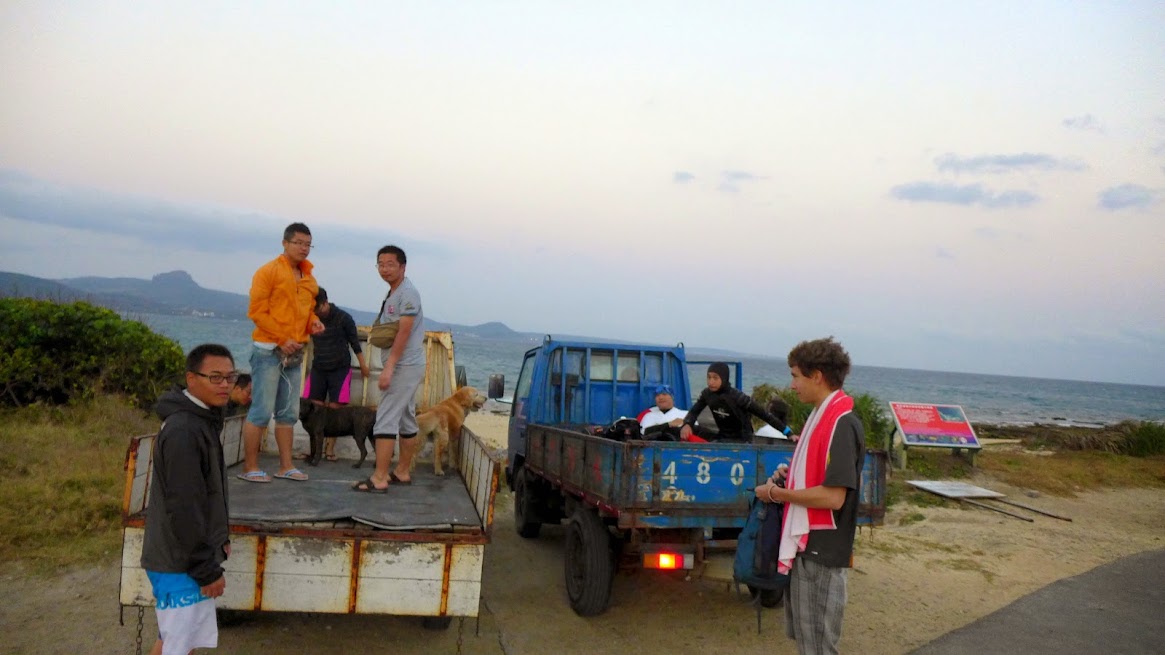 I swear there are no (enforced) vehicle regulations in Henchun. 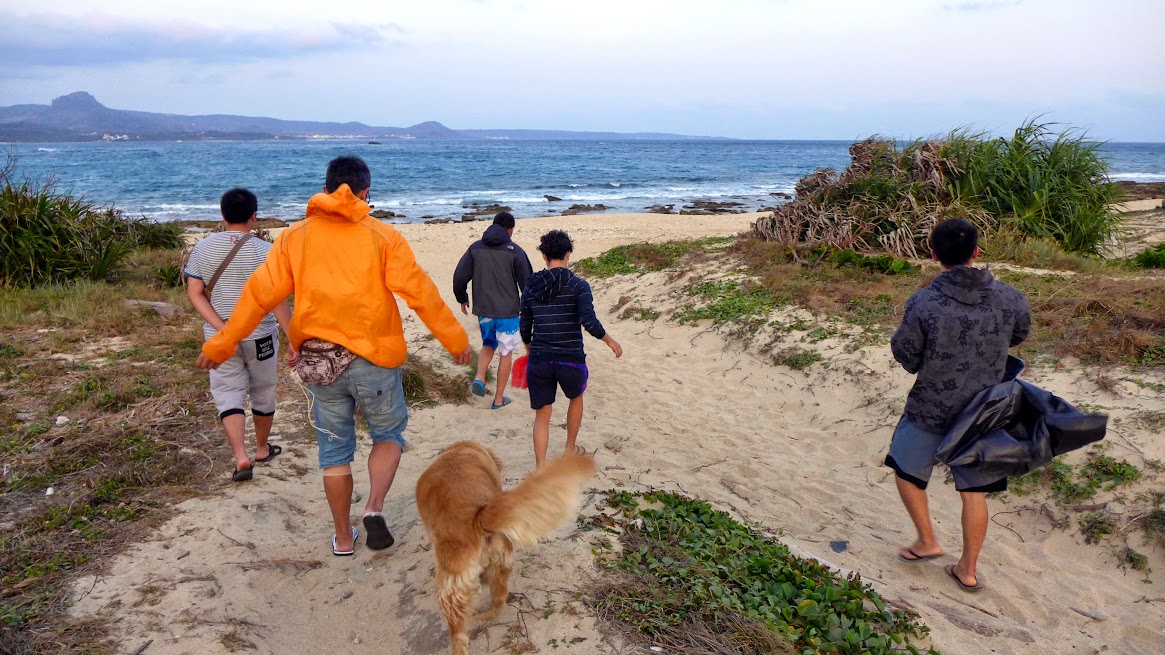 Very windy by the ocean, about 5 minutes drive from TDC. 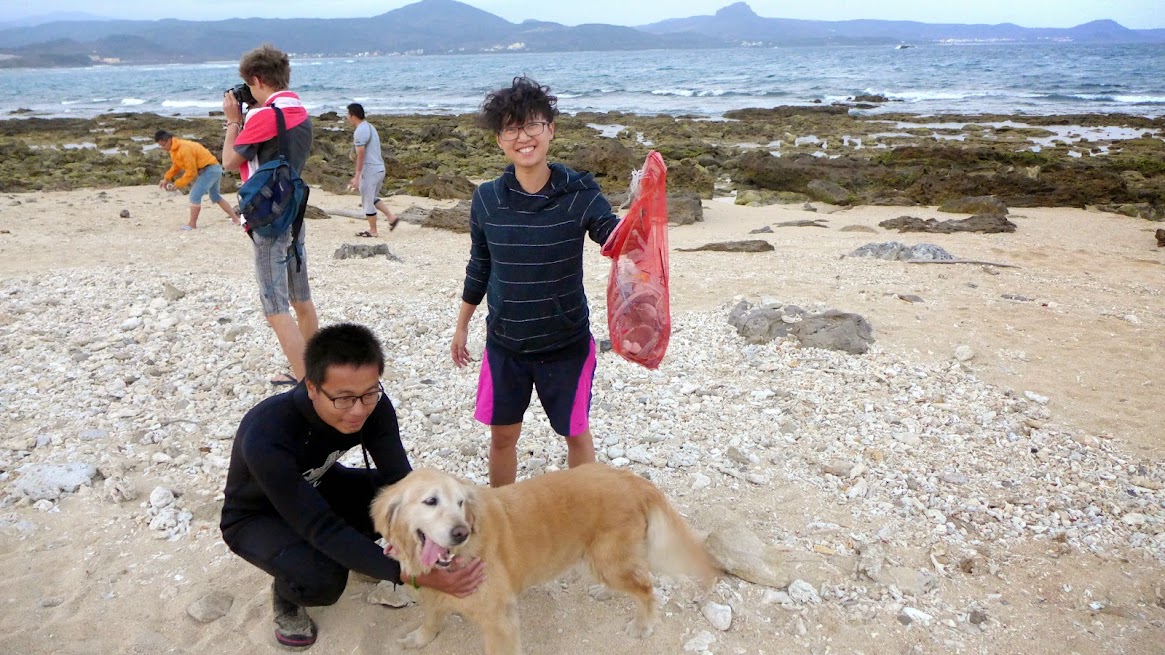 The sunshine girl who picked me up and “Stinky” the mascot.

Lots of plastic in all shapes, sizes and forms. We collected mostly larger pieces. It was only for 30 minutes or so and we got two bags full of trash. Called that a day and returned to TDC. By then the bubble tea has long gone, and I was starving. I suddenly realized that I did not bring any food, and there’s nothing within walking distance. It’s almost like we’re camping out in a warehouse full of nitrogen tanks?! As it turned out, every evening, the group heads into town together for dinner and hangs out. There could be no better news. Do I get to tag along to eat with the locals at the best food joints in Henchun? 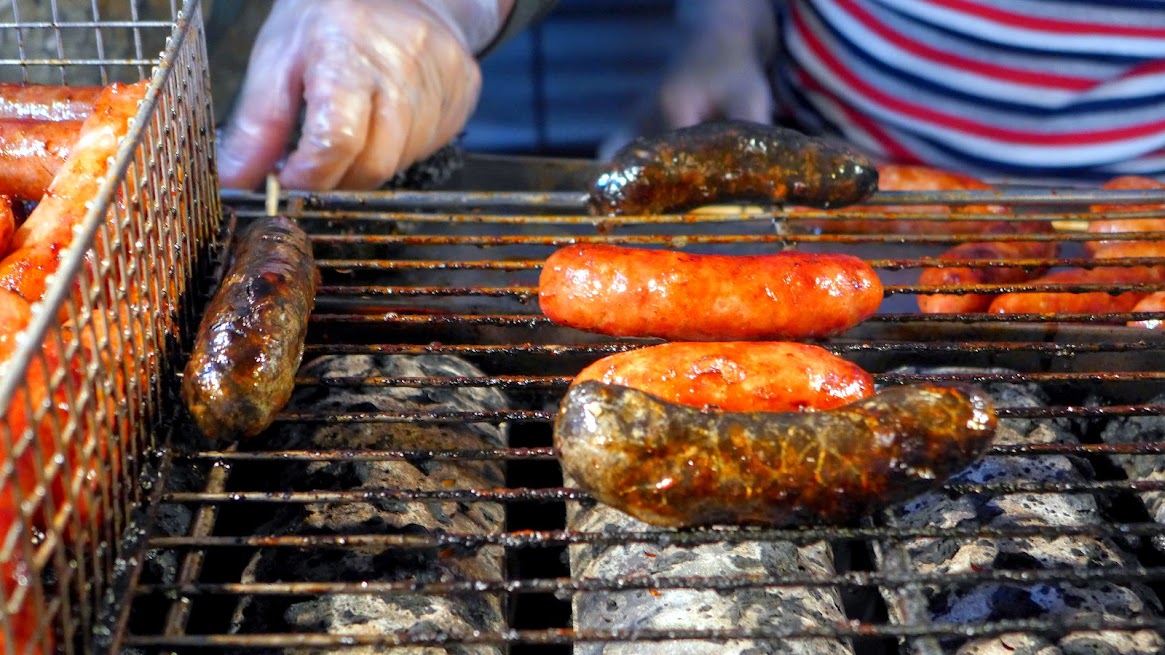 My first of three days path to getting an Open Water certification. It was an awesome mid-week timing; the coach had me as his only student. It’s perfect because my first horrific diving experience in China nearly turned into a lawsuit. I’m hoping to learn this time at my own pace. The first dive was off-shore. Four hours later we returned. Little did I know, my coach has the patience of Master Oogway. The first session was supposed to take only two hours! People thought we must’ve gone missing. Thanks for his patience, however, I felt very comfortable with my ear pressure, which I had a lot of problems with even just going 5 feet under.

The afternoons are for studying. Gosh Stinky, why am I not better at math!

Boat dives today! For the first time, we’re going in deep. We begin descending by rope and stops at 18 feet. Buoyancy, pressure, hand signs, oxygen level, lots of terms I’m just getting acquainted with are all out the window. I can admire a bundle of coral for 20minutes I think. There is so much to see. Traversing between deep grooves and schools of fish feels like a whole another world. Yes, people say that all the time, but now that I’m in it, I wish I had fish lungs.

Another boat dive. I’m starting to get hooked! I had a GoPro but no filter, so that was not good enough to pick up the colors underwater. The little editing that I can do to enhance the images is nowhere close to the real thing. 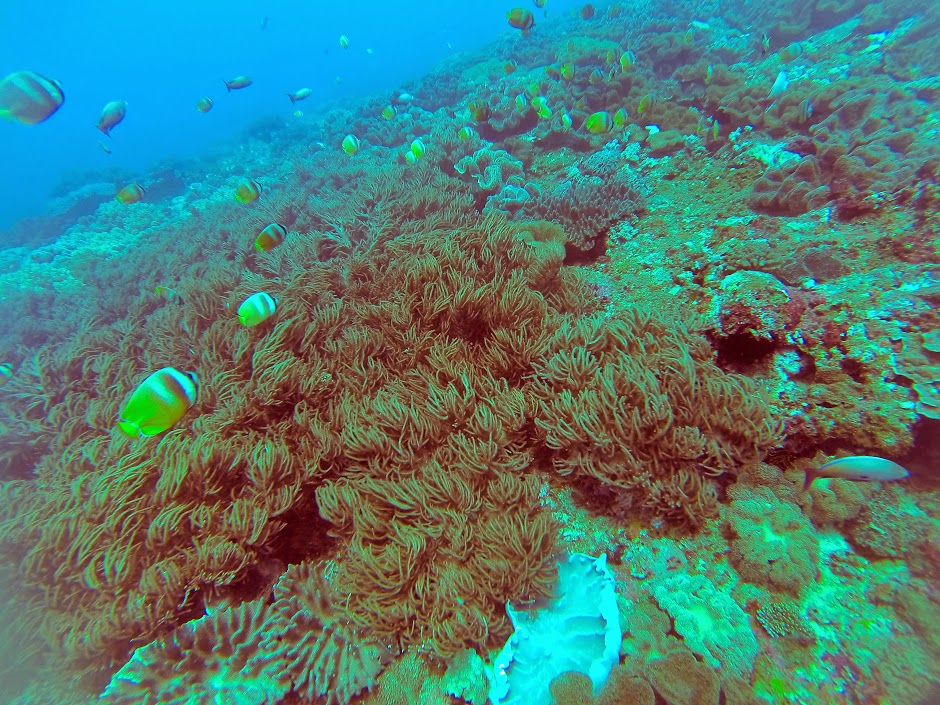 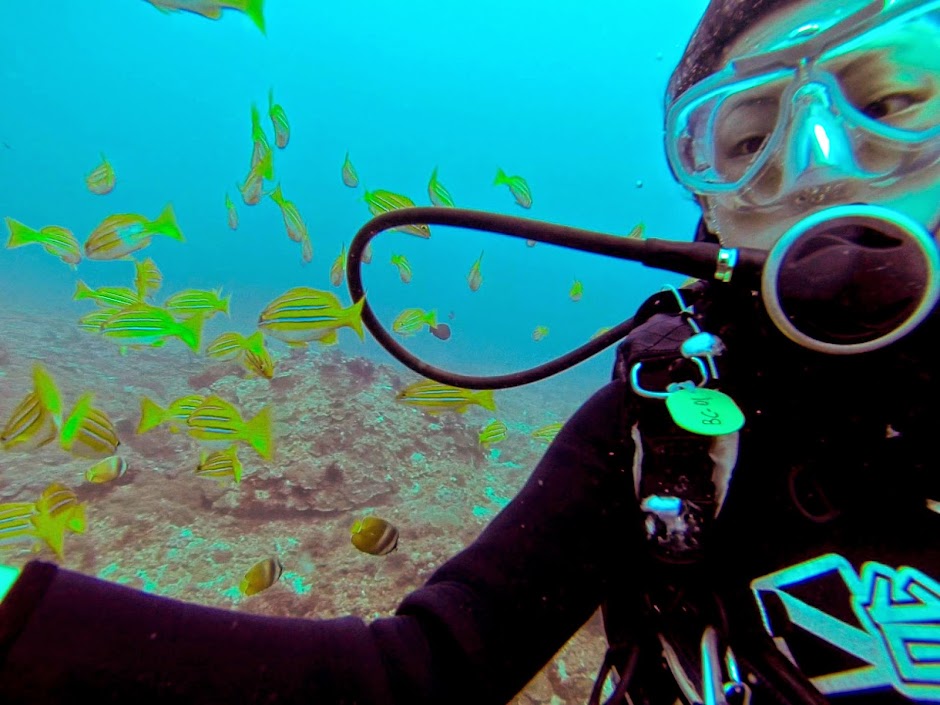 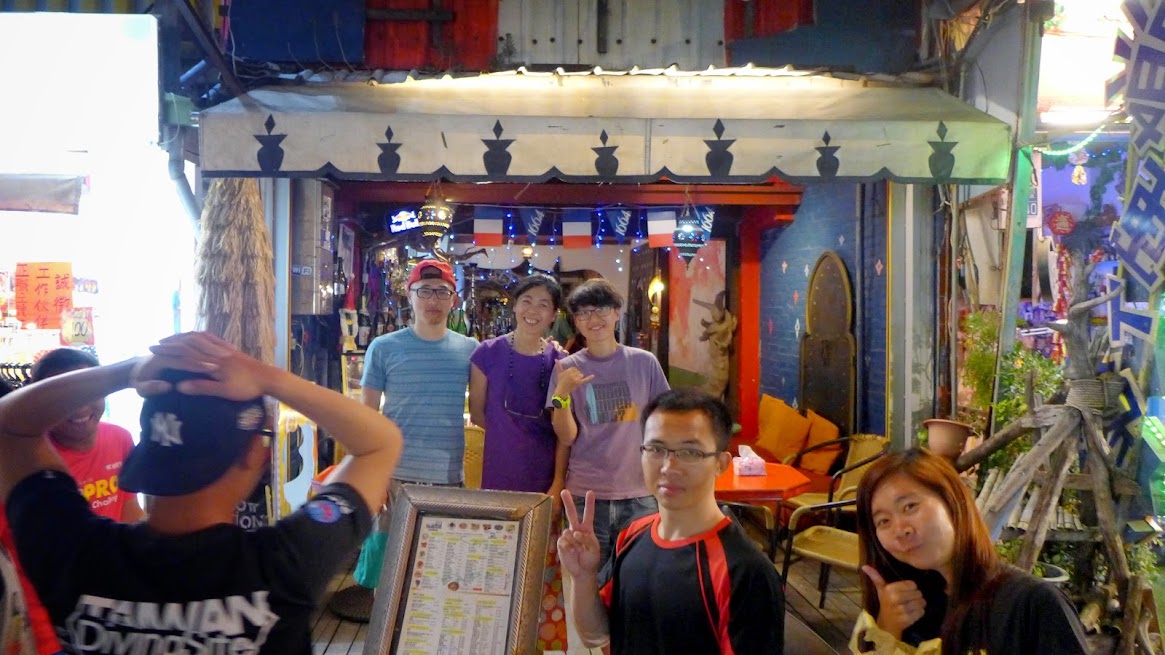 I took the test today and passed with as much color as my underwater photos.

Leaving Kenting was saddening. The group of people there are total gems (though I overheard some general business politics, that will be true for every single profession, no exceptions). From the founders to new staff, they all love the ocean and have a true passion for diving. In the diving business, having a Master Diver certification will allow one to travel and work in any dive shop in the world. As I continue to follow some on FaceBook, it’s been amazing knowing where they are now. And the underwater photos are just breathtaking. Please visit TDC! Not only that they provide excellent coaching and certification experience, but they’ll also consider you one of their own and you will get a chance to explore Henchun the local way.