To wake up at 4 AM is almost natural when one goes to bed at 8:30 PM. Unless you had been chugging coca tea all day and have the caffeine kick in not when you needed it, but when you sleep. With roughly 5 hours of sleep, I woke up to a friendly wake up call — piping hot coca tea! In South America, MORE coca tea is the answer to a lack of sleep caused by caffeine overdose. 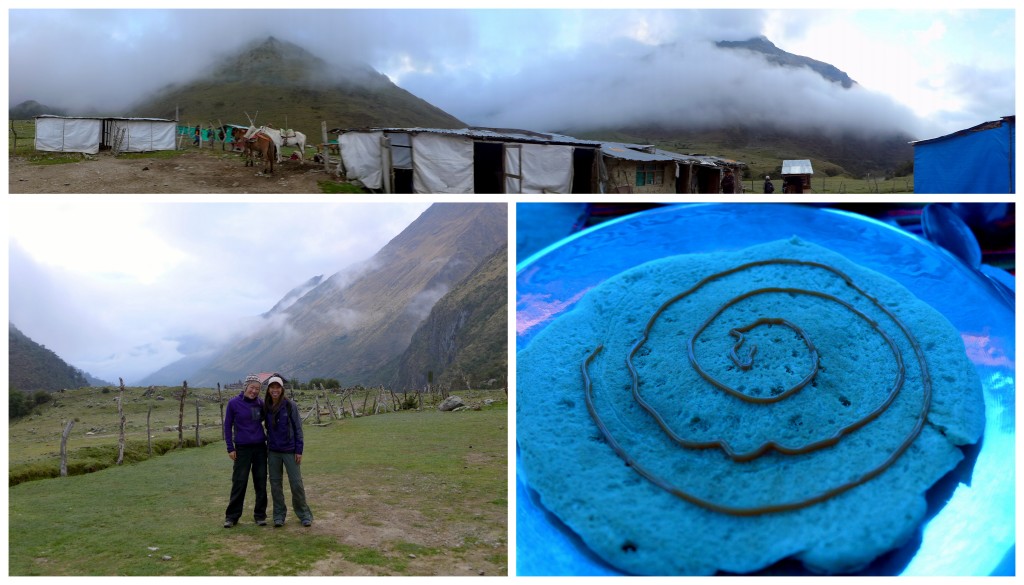 The morning fog that intertwined through the valleys of the mountains that surrounded the campsite was breath taking (in addition to the breath taking high altitude, I really don’t have much oxygen left). I could stay multiple days at this campsite and watch the mountains move. 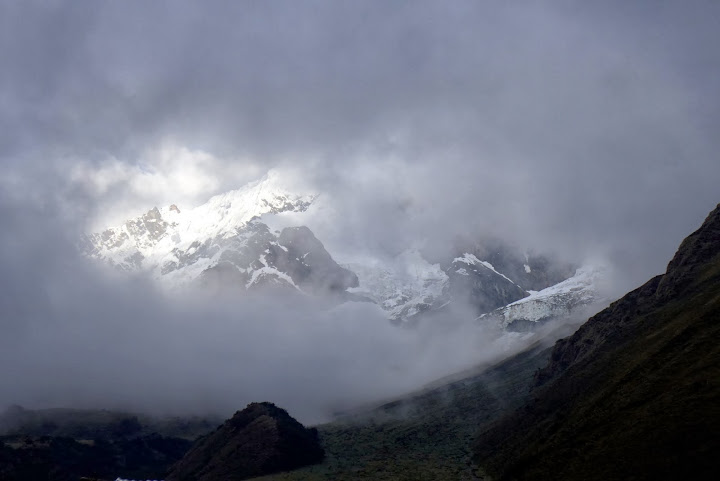 There are poems and songs written about scenes like this!

However, Jorge had other plans for us. We told him the night before that it will be a good idea if we can take horses up to the summit, otherwise we would need to start trekking at midnight to make it there the same time as everyone else. So Jorge arranged that little activity for us.

I got the horse that did not want to be caught. Took the rancher a good half an hour to ring him in. Annie’s horse was docile and had a baby horse. The baby followed us the entire way to the summit! We went a slightly different route than the trekkers and crossed some seriously rocky terrains.

Annie’s baby horse following and leading the way. The whole time Annie wants her horse to go faster, and I want mine to drink water. Neither of us succeeded.

About 3 hours of horseback riding later, we reached the summit barely in time to meet with our group. There are other groups of trekkers but our group seems to always be faster than everyone else, they are beasts! 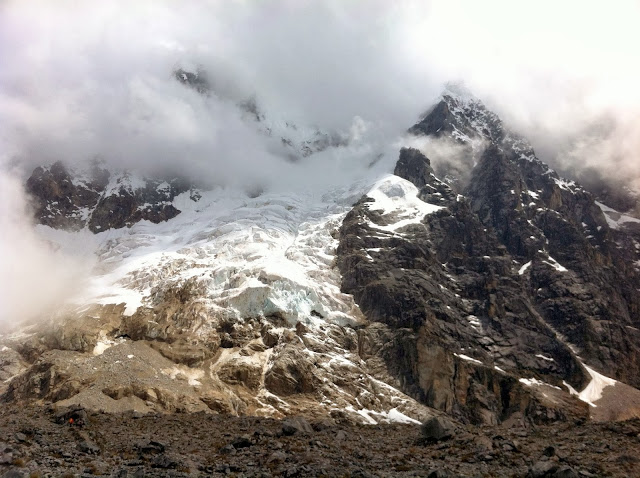 The Salkantay mountain. You can hear crackling of the glacier and avalanche from afar.

At the summit, the horses turned back around and we took some crooked group photos. Then Jorge showed us a lagoon by Salkantay that was hidden from the trail’s view and demonstrated how to setup a proper stack of prayer rocks.

My battery died half way up the summit. Bleh. Good thing Annie always have extra batteries in hers! Photos courtesy of Annie.

From here on, the trek became a steep descend from the summit. It is most noticeable in the temperature, flora and fauna. No longer were we chased by mists or stealthy lumps of clouds, instead, there were large lava like rocks peppered throughout the hills. 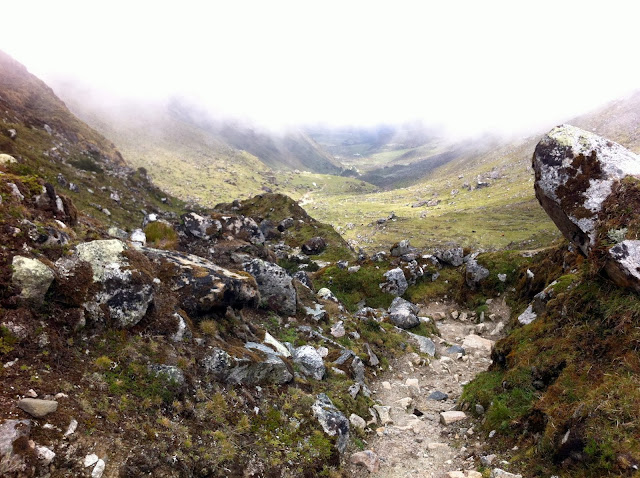 Descending from the summit…no more horse from here on out, but it’s much more doable than going up. Not struggling to breath anymore.

The geography changed so rapidly that shortly after we left our lunch spot, we had exited the altiplano (high plains region) and was on our way into the high jungle. Jackets, hats and gloves began to come off and the plants were getting taller and vegetations denser. 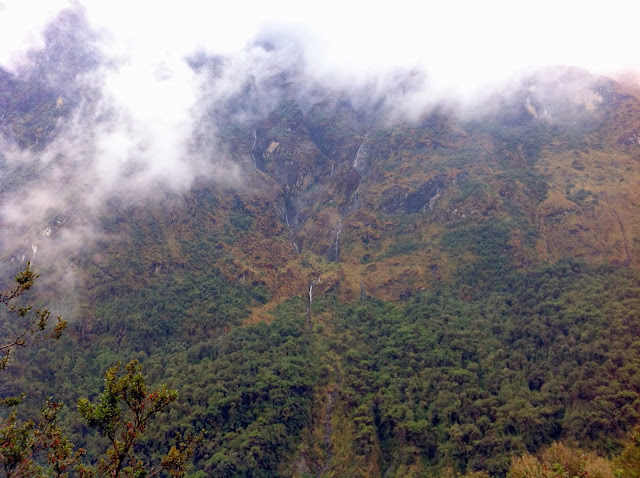 From yellow to green, another sign that the ecosystems has transformed from altiplano to high jungle.

Aside from the few moments of excitement from the shift of ecosystems, the afternoon was quite strenuous. Jorge only stopped twice in 3.5 hours. For some in the group, to descend was way harder than ascend. Luckily, the trek became easier for me as the altitude dwindled. I had more energy and took breaks for pictures, not to catch my breath every two minutes. 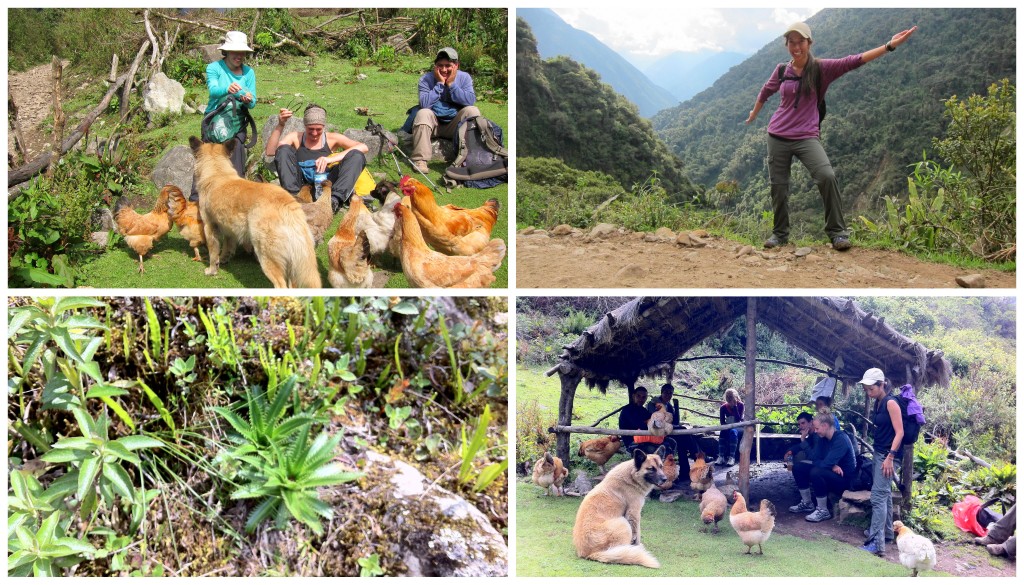 Erin grew up in a farm, so I thought she might want some chicken loving and threw some granola seeds on her. 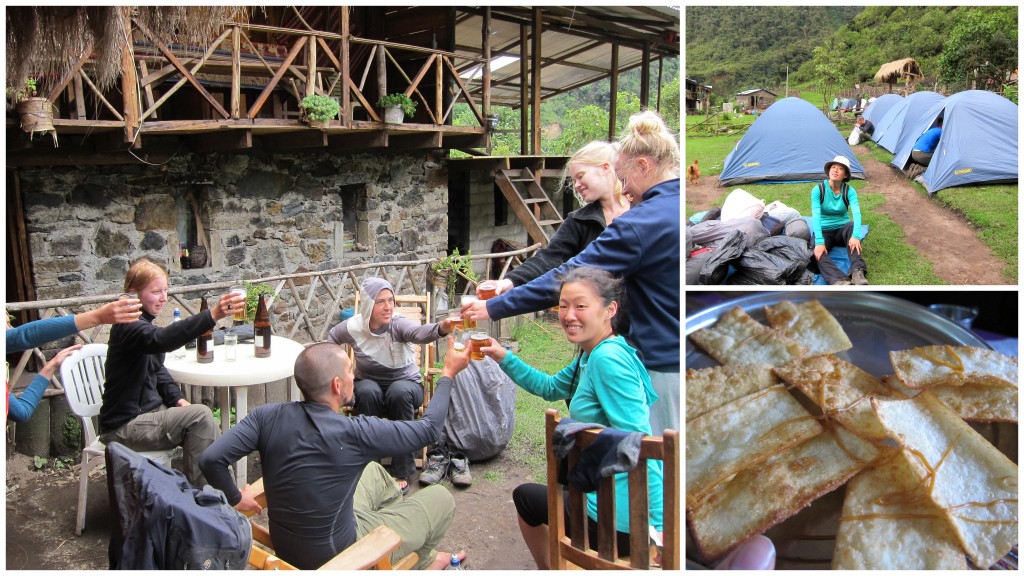 At night Jorge taught us a fun game, which we turned into a drinking game all while practicing our numbers in Spanish. It’s hard to explain but it’s a great group game that must be shared when I’m back in the los Estados Unidos!

Another early morning woken up to my beloved coca tea. The third day is when Annie, me and the three California girls must split from Jorge’s group because we’re on a 4 day trek (instead of 5). Boo. Though we will still trek together until lunch, then us five must venture forth to Aquas Calientes while the group stays overnight at campsite #3. 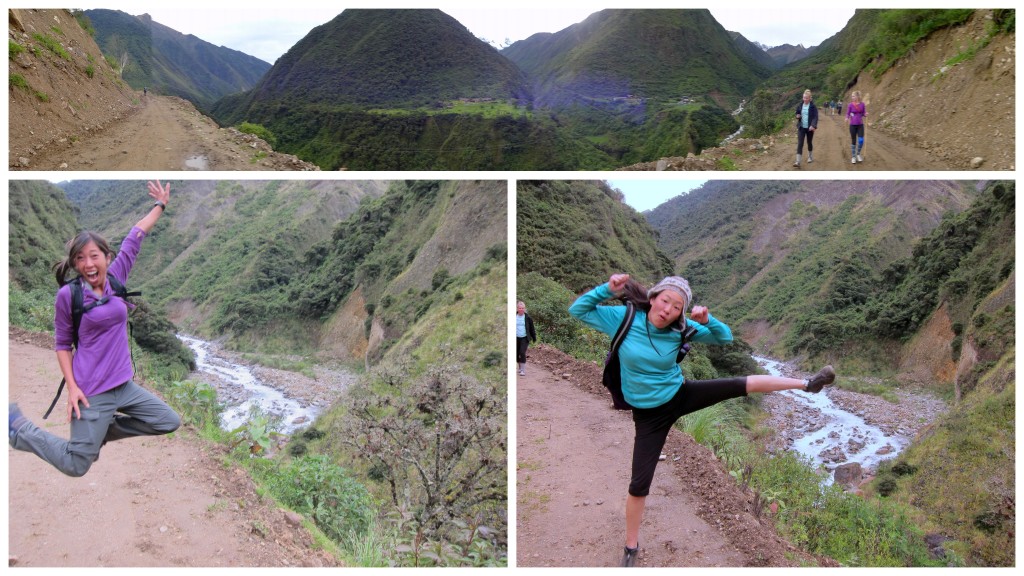 Kicking off to a new start, literally.

The descend continued and so did the change in ecosystem. The color palette went from white, yellow, and grey to green, green and green. The biologist in our group confirms that we have indeed reached “the amazon.” Jorge showed us wild strawberries that we can munch on, just make sure to pick only the ones more than 4 feet above the ground. Why? Because you never know who or what had to take a quick break! 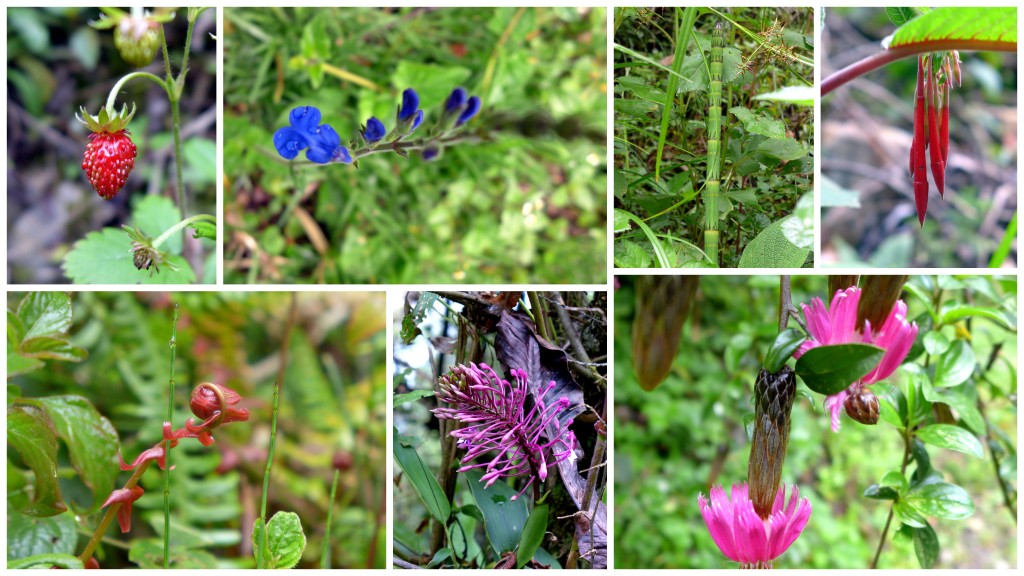 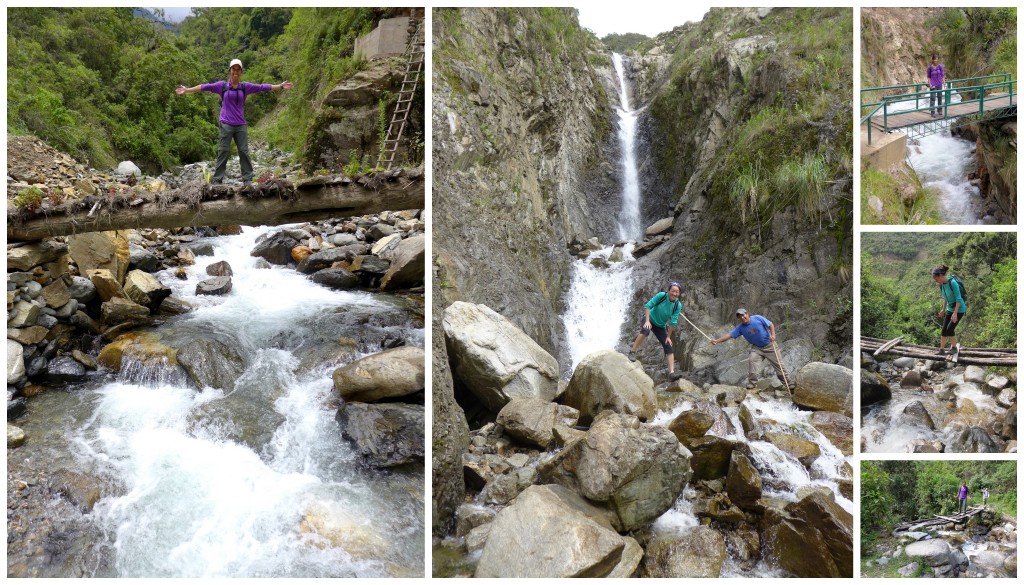 In addition to the greens, we were crossing waterfalls like nobody’s business. Somewhere along the way we stopped for a break. And when we resumed, there was a dog leading us out of the neighborhood. We thought he would turn around and head home at some point, but instead, 30 minutes later, he was still at the front of the pack. An hour later he’s as jolly as can be. Two hours in and we were in a completely different town, and the dog was still with us. By then, someone from the group named him “Grindal” and he became one of us. He integrated himself as the pack leader and we sheltered him from neighborhood dogs that wanted to fight him along the way. 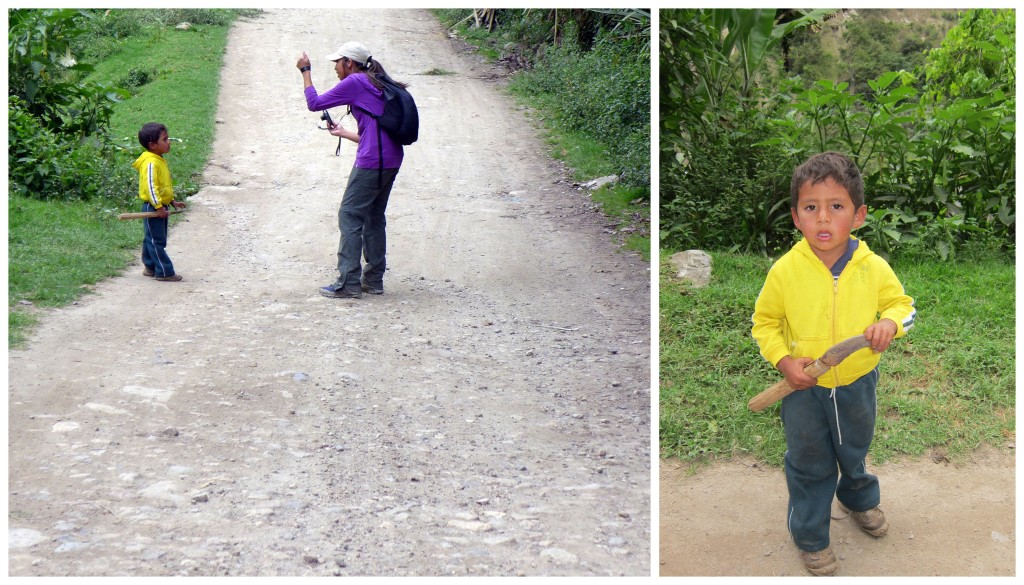 Annie asking the little boy to pose with his machete…

Grindal vs Chicken vs Food…

We reached our lunch spot at  “La Playa” around 1 PM and was welcomed by a feast of local cuisine, presented “The Last Supper” style. We gorged on the goods and Grindal came by the table near the end. It is quite common to spare some left over food to the dog, cat or chicken in the South and especially for a dog who trekked with us for nearly 3 hours. At first I dropped a chunk of a potato tuna sandwich and Grindal practically swallowed it without chewing. You can tell he was starving. I dropped another chunk, this time, a grown but young rooster came over for a piece of the action. Grindal did not like the invader at all and chased the rooster away.

Then a third portion of the sandwich was given to Grindal and once again the rooster casually strolled back for some food himself. Grindal lost his cool and without warning, snapped his neck back and gave the rooster a good chomp. I think Grindal was aiming for the wings or butt but instead his gnaw buried a tooth right into the chicken’s head. The chicken was on the ground immediately and fluttered his wings a few times before he succumbed to a loss of blood and neural connectivity. 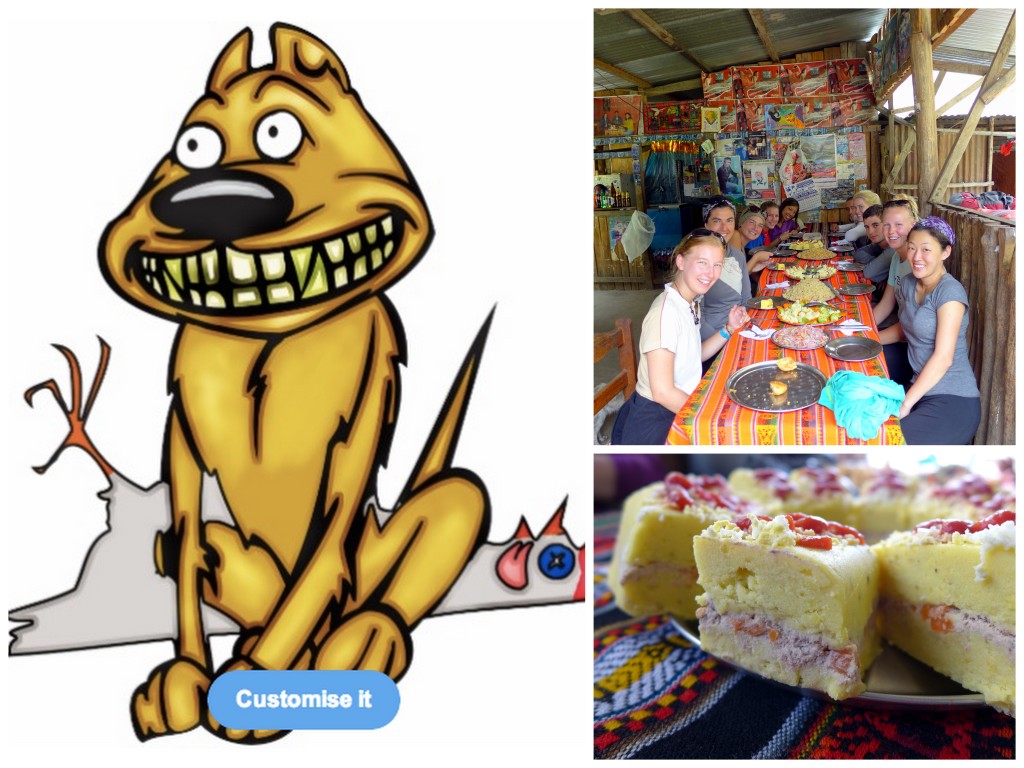 No pictures of the incident or post incident were taken out of respect for the rooster. Image courtesy of Zazzle. Group photo and the potato tuna sandwich.

The lady of the house saw the last ten seconds of this horrible episode and tried to rescued the chicken and wash off the blood. To no avail, the rooster died in her hands. She was furious and demanded to know where the dog went. Grindal had escaped during all the commotion and luckily the lady didn’t get her hands on him. And the rooster was boiling in a pot. However, as we were finished with lunch and was waiting outside for the bus, the lady was waiting as well, by the door with a bat in her hand. She was waiting for Grindal and to return the favor.

Jen had the brilliant idea of collecting some donations from our group to pay for the chicken in hopes that it will ease her anger and she won’t try to knock the ba-jesus out of Grindal. Jorge, who was also quite attached to the dog, presented the donations and we left on the bus, hoping for the best.

A map of our routes:

We bid farewell to Jorge and the rest of the group then trained to Aquas Calientes for the night in preparation for Machu Picchu on the fourth day. First shower in three days!